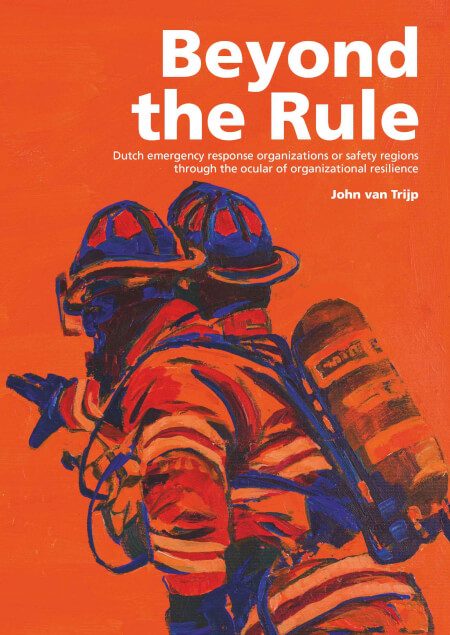 Safety regions, incidents, and the law

In the early stages of research, on 5 January 2011, a major incident occurred at a chemical distribution plant in Moerdijk, Netherlands. The mixing and heating of a flammable liquid resulted in an industrial fire. This resulted in the destruction of the plant and a neighboring maritime service provider. A case study of the blaze was published (van Trijp & Ulieru, 2014) and is presented as chapter four in this book. A complicating factor during this incident was that the toxic cloud emissions created in one safety region crossed the borders into two adjacent safety regions, resulting in those two safety regions starting their own crisis responses with mitigating actions. Next, the inter-safety region communication about the incident and its effects became flawed. Each safety region used different threat levels to coordinate their processes to mitigate the effects of the emissions. To complicate the situation even further, coordination processes at the provincial and national levels were also inadequately executed. Thus, this one industrial blaze in one safety region eventually had a national impact that exceeded the mitigating possibilities of the safety region and its emergency services (Brandweer Midden- en West-Brabant, 2011; Brandweer Nederland, 2011b; Dutch Safety Board, 2012; House of Representatives of the Netherlands, 2013).
This example indicates the institutional complexity of emergency response organization in the Netherlands, and the Netherlands is by no means an exception, as the international literature on emergency response organizations shows. This complexity makes interorganizational collaboration, information sharing and collective action a real challenge. Institutional arrangements are set up to create an administrative order, but in many cases, they are a source of confusion regarding responsibilities and accountability (A. Boin & 't Hart, 2012; Domres et al., 2000; Kerslake, Deeming, Goodwin, Lund, & Wahlström, 2018; Kuipers, 2018; Pramanik, Ekman, Hassel, & Tehler, 2015).
To cope adequately with complex safety challenges like the industrial blaze mentioned above, the response of an emergency response organization such as a safety region should fit the challenges of the moment whether before, during or after an incident. Some incidents have the potential to develop into a crisis, especially when a variety of people and organizations are affected: for example, the prolonged flooding caused by severe weather or climate phenomena (storms, rising temperatures) or a worldwide pandemic such as the Covid-19 pandemic caused by the SARS-CoV-2 virus in late 2019 and into 2020, which turned out to be a creeping crisis, as conceptualized by Boin et al. (2020). However, other incidents, if dealt with adequately, do not necessarily grow into a (creeping) crisis. When several streetcar passengers in Utrecht, Netherlands, were shot by a single terrorist gunman in March 2019, a joint action by first responders (safety region Utrecht – VRU), law enforcement and intelligence agencies combined with a citywide lockdown resulted in the gunman’s arrest that very same day (COT - Instituut voor Veiligheids- en Crisismanagement, 2019; Grapperhaus, 2019).
In contrast to many other countries, which have separated fire and emergency medical services, the Netherlands combines those services in 25 safety regions that act as emergency response organizations. A safety region is a safety authority and inter-municipal agency whose main objective by law is to provide citizens with enhanced protection from hazards, superior emergency assistance and aftercare during and after incidents and crises, regional governance of the individual emergency services and enhanced operational and administrative mitigation capabilities (Government of the Netherlands, 2010). The Netherlands’ safety regions, which bundle a range of safety stakeholders, were formed in response to the widely felt need, at local and regional levels, for strategic, tactical, and operational coordination on safety issues. Currently, these safety regions play a leading role in mitigating and preventing a wide range of safety-related incidents and crises in the physical domain. This means the regions are hardly focused on less obvious domains such as cyber security threats and public safety (Johannink, 2020). ×