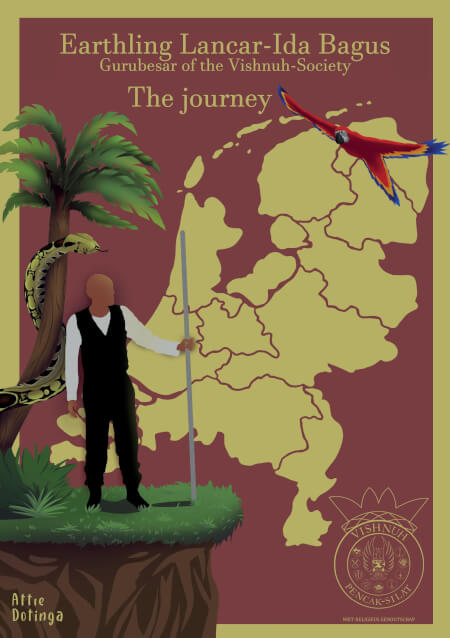 In 1969 a Dutchman was admitted to the Vishnuh-Society with unanimous votes.
This was Mr. Gerrit M. van Praag (Neerlandicus), who, at the request of the Vishnuh-Society, would teach Roberto the Dutch language, European history, and social sciences.
Roberto was only eleven years old at the time.
They called this man "Gerard van The Hague". That was because The Hague was his hometown and he always told a lot of stories about it. Hence its nickname.
Gerard van Den Haag was respected as one of them.
He gave up his former way of life for a hermit life in the Vishnuh-Society.
From this reverend teacher, Roberto also learned more than enough about the overseas, about the distant Netherlands and others.
He still thought that he would never be confronted with this, but that it was good to learn a lot about the Netherlands.

One day, Mr. M.G. of Prague talked with the Vishnuh supporters about the possibility of capturing the Pusakas (heirlooms) of the Vishnuh-Society in Europe.
This is to keep the transition to the outside world under control, with the greatest aim of protecting it.
The society wanted to demonstrate their right to exist in the world. This had to be done very safely and very gradually. ×