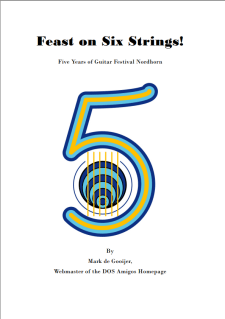 Feast on Six Strings, five years of Guitar Festival Nordhorn. GFN, as it is called in the corridor chat, following its larger American brother GFA.

2011 saw the first Guitar Festival Nordhorn and the festival will have its sixth edition in 2016. A lustrum indeed and high time to linger a bit over the past years of GFN. That implies history, so we will make a start in the past.

In 1977 I arrived in Enschede, eager to leave my adolescent years in Amsterdam behind and to start a study in electronics at the Technische Hogeschool Twente (THT), the technical campus university in the eastern part of Holland that was established there to boost the area. The great advantage of the THT was the campus, unique in Holland in those days, that offered a room in a student flat for every student. That was hardly possible in the other locations in Holland with a technical university -Delft and Eindhoven- that traditionally suffered from a shortage in student accommodation.

My baggage included books, a home-built stereo set, a small rack of LPs, clothing, a bicycle (you cannot go without as a student) and a classical guitar. Two years before I had fallen in love with the instrument and made my first unaccustomed hand movements. I did not start guitar lessons, my parents would not afford them, so I made my first steps as an autodicact, working from a chord book.

Enschede is located in the eastern part of Holland in a region called Twente, quite near to the border of the German states Lower Saxony and North Rhine Westphalia. Many people from the west of Holland consider this area to be the middle of nowhere. The Dutch poet and songwriter Willem Wilmink (who was born in Enschede himself) emphasized this, writing the following lines about his home town that he nevertheless kept loving his whole life long:

"It is the terminus of the train/No one likes this destination/No soul travels down this line/Enschede.."

Before I went there, Enschede used to be a thriving industrial town full of textile industry, with well-known names of ‘textile barons’ like Van Heek, Ten Cate, Jannink and Blijdenstein. After the decline of the textile industry in Holland in the sixties and seventies of the last century, however, most textile factories in Enschede were closed and the city and surroundings suffered from high unemployment and the view of large industry complexes in decline and impoverishing residential areas. That was the situation when I came to this part of the country from Amsterdam and started my study at the THT.

Yet against all odds, in the seventies Enschede established the Twente Conservatory that achieved some international fame and featured education for both classical and jazz musicians, the latter being a rarity in those days. At this conservatory Fred Rootveld, Bobby’s father, professional pop musician, and entrepreneur of the Ivory Tower record label, passed the entry tests and completed his study of classical guitar with Louis Ignatius Gall. A pop musician that was admitted to the conservatory, that was a kind of revolution in the then stronghold of classical music! Fred met this challenge valiantly and successfully!

As a student in electronics, I decided to adopt the classical guitar as a serious hobby, so I took my first guitar lessons at the Enschede Musical School with Thea van der Meer who just graduated at the Twente Conservatory. In that way I got acquainted with guitar concerts and later events like the Segovia Guitar Festival in the early nineties. In those days the guitar scene was quite alive and even drew the attention of the organizers of the Guitar Series concerts from Amsterdam. In this way I attended concerts by amongst others the Assad Brothers (that was great!), Manuel Barrueco, Sharon Isbin and David Russell. Unfortunately at the beginning of the nineties the scene declined and the visits of classical guitar icons became rare.

Classical guitar festivals were not common in Twente. The nearest festival was the Zwolse Gitaarweken, the famous festival of the Zwolle Conservatory that had been established by the guitar professor Pieter van der Staak in 1969, but that was more than an hour’s drive to the west from were I live. Possibly it would have remained that way forever if Bobby Rootveld had not studied classical guitar at the successor of the then Twente Conservatory in Enschede, the ArtEZ Conservatory.

Knowing the previous history, it was no surprise that Bobby would pick up the classical guitar and study at the Conservatory like his father. Some things you learn at your father’s knee! Bobby, however, did not want to study guitar to become a performing classical guitarist or music teacher at a music school alone. Having a background in entertainment, cabaret and vaudeville theatre from his family business, he developed a broader view on performance with the classical guitar and took the extra course Classical Guitar and Theatre at the Messiaen Academy.

He realized this approach in two ways. First he met the recorder player and currently his wife Sanna van Elst and formed the Duo Niet In Het Zwart (NIHZ) in 2001. NIHZ translates as Not Dressed In Black, black being the standard outfit during performances of many of their classical compatriots. This nomen is an omen indeed, but for the better! Their performances connected with other art forms (such as paintings, light shows and recitations by a poet or narrator) and included clear elements of theatre and cabaret, so both ear and eye are pleased. That was how I met Bobby (and Sanna of course) in the town of Borne in the old Synagogue at the end of 2004. My wife and I liked their music and started to follow their recitals.

The third field was an initiative for a guitar festival. He enthused a number of friends from the conservatory to establish a festival for the classical guitar and the first Twente Guitar Festival was born in 2006. When I heard from this festival, being an amateur guitarist I overcame my diffidence towards master classes and subscribed. Since then I have been present to witness the history of the guitar festivals in my region.

I liked the festival that much that I started a blog-like report on my web site, the DOS Amigos Homepage. I had established this website in 1998, just to have a practical implementation of my HTML training course with the intention to share the scores of my guitar music world-wide, of course within the confines of copyright, so my collection basically is a (More than 50 years) Dead Composers Society.

For me, however, the DOS Amigos Homepage was more than a music sharing site. For me it was also a writer’s medium besides the fantasy books that I had authored (with even one published for real). I wrote about the composers and their pieces and added Guitarities on various guitar-related subjects like stage fright, ensemble quirks and competition playing.
I had not tried my mettle in journalism yet, so the first Twente Guitar Festival was the start of writing about the guitar and their players. And I have done that ever since until the last Twente Guitar Festival that I attended: during festivals my notepad and pencil are my companions. No, no tablet or laptop, the light from their screens would disturb the concerts, let alone the tapping or keystrokes.

In every history there are developments. Bobby Rootveld had a clear view of what he wanted to do after his graduation. His dream was a cultural centre for music where he could organize festivals, courses, master classes etcetera for a living, a meeting place for guitarists all over the world. To this end he roamed the region and beyond (in Germany) and finally found a suitable place in Nordhorn in the German state of Lower Saxony just over the border.

In fact Nordhorn is a city much like Enschede. It had become relatively wealthy because of the textile industry with well-known names like Povel, Rawe and Niehues Nordhorn (famous for the NINO-Flex product). Unfortunately in the end the textile crisis stroke here too and all textile factories were closed, leaving the city in relative poverty. However, also here things got slightly better and Bobby found a nice place in the vicinity of the old NINO Hochbau that now houses all kinds of small companies. That place became Kulturhaus NIHZ, Kulturhaus being German for House of Culture.

I got the idea to write an anniversary book on the occasion of five years GFN with some more information than the reports than I already wrote on the DOS Amigos Homepage. A large part is dedicated to the people that made the festivals.
The book contains a section about Duo NIHZ and Kulturhaus NIHZ, Bobby and Sanna Rootveld, the organizers of the festival. Other chapters are reserved for interviews with the volunteers and supporters, artists that have appeared at the festivals, participants of the professional-student and amateur events of the festivals. Additionally there is some information about the luthiers that crafted the prizes of the professional competition.

In its existence the festival achieved a lot of partnerships with companies and cultural foundations. A special chapter pays attention to these contributors of the festivals.

As a tribute to Louis Ignatius Gall, the principal guitar teacher of Bobby and his father, you will find an impression of the festival that was held in Kulturhaus NIHZ in 2014. In a certain way Louis Gall has contributed to the establishment GFN.

I hope that you will enjoy reading this book as much as I did with the writing and last but not least enjoying my participation in these festivals.