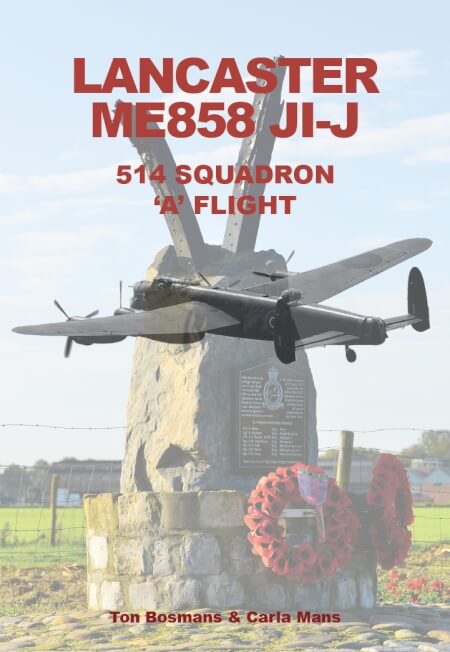 This book came about because, since childhood, I have been interested in WWll.
In the autumn of 1999, at the seven graves of the Lancaster crew, in the cemetery of the church in Hunsel,
I was joined by Annie Wood (sister of Harold Long),
her son Colin, and his wife Ann.
For her it was a very emotional visit to the grave of her brother, Harold Long.
I was promised a photo of Harold, and this arrived by post sometime later.
This photo made me very curious as to who the other six crew members aboard the Lancaster were.
I only had the names of the crew listed on the graves.
I had no information about what aircraft and to what squadron it belonged. During a visit to the military cemetery at Rheinbergen (Germany) I came across an employee of the CWGC, and he gave me the address of the RAF Air Historical Branch.
This body gave me the necessary information as to which aircraft I was looking for.
I came into contact with several people who provided me with the necessary information.
After a few years I contacted several of the bereaved relatives of the crew members.
Because most of the communication was by post,
several months passed before there was a reply by post from Canada or England.
In this book you can read the history of the Lancaster
ME858 and the crew of 514 Squadron.

On 21/07/1944 at 00:20 I commenced duty as radio operator in the crew of Uffz. Sarzio from Deelen airfield aboard BF 110, G9 - JP for night combat duties (Tame Sow). We were directed to Gorilla sector by group command. From here we were directed into formation by radio fire report from Deelen. At 01:10 at 600m altitude and 3.8km distance
I had a SN2 fix and led my pilot up to about 200m. I soon saw the target above me on the right and saw a four-engine plane with double rudder. We positioned ourselves behind the enemy aircraft and my pilot fired, attacking at 01:12. The enemy aircraft immediately ignited on the left side and fell vertically downward.
I followed the fire until the impact took place at 01:14.
Particularly noticeable was a huge fire amongst which were several dark red areas or spots. I then took several bearings, from St. Trond 30 deg. and from Venlo 250 deg. We landed at Deelen at 02:40. ×