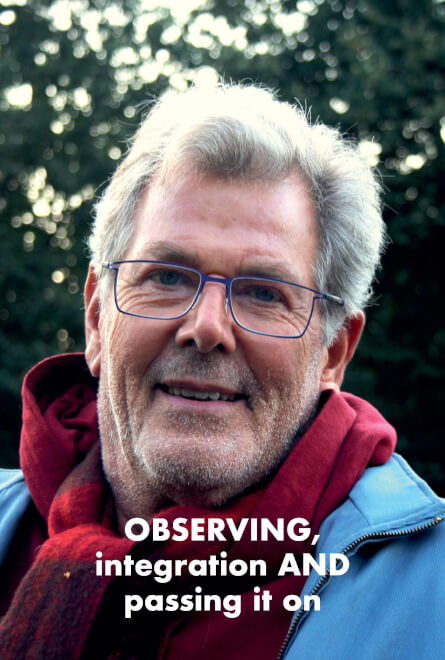 OBSERVING, integration AND passing it on

However, the teacher did not have much faith in me and kept pointing out things she thought I had not mastered yet. For example, she said: “No, Tom, you can’t tell the time yet.” I then walked over to a box full of timepieces and, to her surprise, could tell her exactly what time it was on those clocks. I could not tie a knot either, she presumed, after which I proved herwrong again, by tying my shoelaces and doing the exact same thing again on the board where the kids would practice their lacing, further up the classroom. Looking back at this situation, I cannot help but think, madam teacher, you could have handled this in a different way. Rather than assuming I couldn’t do cer-tain things, you could have just asked me instead, if I had already learned those things

Mother was in charge of the family; father was always on the road doing business and there-fore hardly involved in our upbringing. My mother did encour-age him to occasionally express himself to us, but when he did it was mostly in anger, and it came down to correcting things that had gone wrong from his point of view. So, my mother has become a mature quality in me through her constant presence and constant care.
The situation with my father was different. I will give an example of how something like this can manifest itself in some-one’s life, in this case my own life. When I was in my early twenties, I noticed something was wrong with me that I could not explain. This feeling expressed itself in all kinds of state-ments, which I never spoke about. I made up for what was hidden in me with a good job, a lot of travel, nice clothes, expensive cars, and so on. It was not until I turned forty, in my midlife period, that this feeling surfaced so forcefully that I immediately knew I had to do something about it. I searched for a way to deal with it, and I came across tantra training. In that tantra class, a men’s, and women’s workshop that I still teach today, I found out that I never knew my father.