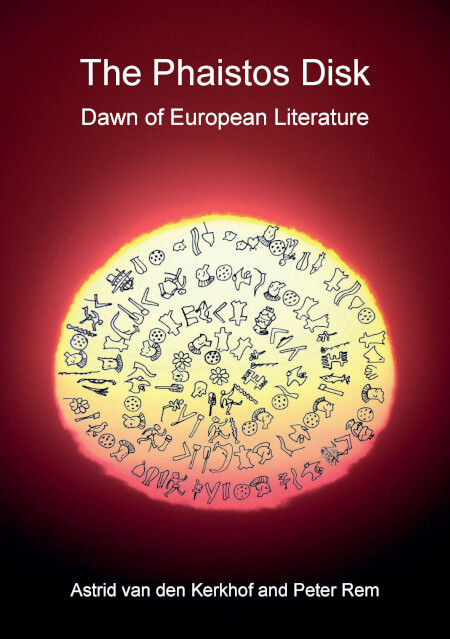 There are few facts about the Phaistos disk that have not been hotly disputed. If the disk had been an ordinary find, it would probably have been classified as a religious Minoan artefact of the Old Palace period, since it was found among items of offering in the Northeast sector of the Old Palace. In reality, the disk’s mysterious appeal provoked quite some theories about more spectacular origins. Chadwick (1987) proposed that it was of foreign making and imported into Crete. Eisenberg declared it a fabrication by Pernier himself (Hnila, 2009).
In truth, there is nothing to the disk that conflicts with a straightforward archaeological interpretation. Ancient Crete produced many objects with religious texts, including the libation cup of Figure 6, painted in a spiral format. Indeed, the symbols on the disk are more elaborate than those of the Linear A script. Yet, many pictographic engravings on Minoan seals are just as detailed and ornate. An inscription with symbols very much like those on the disk was found a few decades later on the Arkalochori axe, buried within 60 km of the palace of Phaistos, (Figure 15).
Some authors have proposed that the script of the disk could be alphabetic or logographic. Yet, as far as we know, all scripts of Minoan Crete are basically syllabic. Apart from numerals and special symbols for often-used measures or products, regular text is made up from signs that express a vowel, or one or two consonants followed by a vowel. The text on the disk fits well with this system of writing. Statistical analysis shows that the average number of signs in a term (i.e. a group of signs between vertical dividers) is 4.0 for the disk and 4.1 for Linear A. If an object the size of the disk were written in the Linear A syllabary, it would probably have 45-51 different signs. As it is, the disk has 45 different signs. There is, in short, no reason to think that the author of the disk invented a new way of writing, one that was essentially different from the various syllabic systems that were customary in Minoan Crete.
×