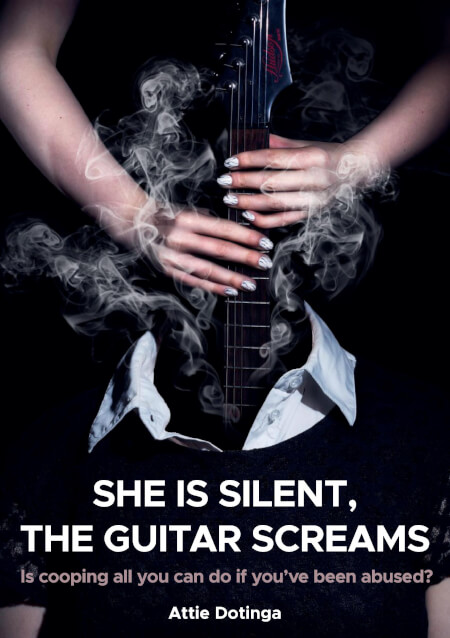 She is silent, the guitar screams

Is cooping all you can do if you've been abused?

Falinn, Falinn, Falinn!"
The dimly lit stage was a clear beacon. The heat from the lamps showed the dust in the air.
Only the first three rows of people were visible, then came a faint black space with contours.
Not only the lamps gave warmth, but also the many bodies tightly packed, dancing, screaming, screaming.
I grabbed the old Fender again, my faithful companion. I decided to close with a new song. It was a ballad and I sang it in Scottish Gaelic an ancient Celtic language. My Fender sang with me about the pain, sadness and loneliness. About a lost life, a lost love and a lost future.
It became quieter and quieter in the room. Even though the words were not understood, the emotions did arrive. There was no other way because I released them there.
There in the spotlights, on stage in that big theater hall, that's where it was all allowed to be. There I could release it without danger, without threat. There I could be who I really was.
Open and exposed, for a while. It was safe there because I was the boss there.
The sounds slowly died out and the applause swelled.
It made me feel alive, the blood flowed faster through my body. It felt like I mattered, like I was being listened to for a moment. As if my existence had another reason.
I bowed deeply to my audience. Grateful that through them I could do what I did. I jumped off the stage while the band played for another three minutes. So I had a safe exit to the dressing room.
There I plopped down in a red bucket seat and drank the prepared bottle of water in one go. My throat was grateful to me. My hair stuck to my forehead under that white wig. Pulled the thing off my head and threw the black cloak off of me. I looked in the mirror and saw that the black white make-up, which partially hid my features, was still intact despite me sweating so much.
I washed my face with the special remover diana had put down for that purpose and then jumped in the shower.
Delicious. Rinse off the sweat and finally feel the stone cold jet of water on my body, as long as I could keep it up.
The startle effect and the pain it ended up doing gave me a good feeling.
I put on my jeans and bra and looked for my wide sweater with the big hood. A few drops of water slid from my hair along my neck over my back, it was almost an erotic feeling.
There was a knock on the door, a fast dull rhythm.
"Inside."
I saw the questioning face of Mace the drummer appear around the corner of the door. "The boys and I are going into town for a while," he reported. I nodded, the next day we performed again in the same theater, so why not. ×