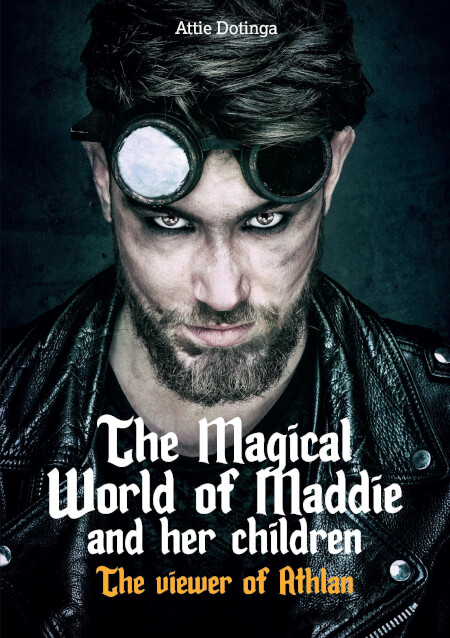 ‘Are we going to Grandma's or are we going straight on?’ Bran asked enthusiastically.
‘Grandma,’ said Forrest, ‘or she'll sound the alarm because I bet they warned her we were coming.’
Bran nodded slightly disappointed. They walked out.
The small village was located at a large lake and had many small alleys and paths. The boys walked briskly to the harbor, where the large ship 'the Seahorse' lay.
As Bran and Forrest walked up the gangplank, Grandma came running. So she clearly knew they were coming and had probably already been looking for them.
‘Oh boys,’ she said happily, ‘I almost didn't recognize you; you've grown so big. Real young men already!’
She hugged her grandsons, who didn't come very often and went in front of the cabin and down the stairs.
There in the large cozy living room, Grandpa Hessel was already drinking coffee.
He shook hands with both boys and wanted to know how they were doing.
Grandpa and grandma had nothing to do with magic, grandma was even a little afraid of it. And that's why it was never talked about or used magic in front of them.
Grandma baked cookies. Of course, she also wanted to know everything about her other grandchildren.
The two boys enjoyed it so much that they forgot the time a bit. Grandpa had a great sense of humor. He liked to play around with words and statements and that was something they really appreciated.
But then Bran nudged Forrest with a glance at the clock.
‘We have to go,’ Bran said.
‘Already?’ asked Grandma, who had expected them to stay for lunch.
‘Just dropping by a classmate, Grandma,’ he said with a wink.
‘A girl?’ Grandpa asked.
Forrest smiled and Grandpa nodded in understanding.
‘Yeah, grandma and I can't compete with that,’ grinned Hessel, who certainly remembered what it was like to be young.
Grandma nodded understandingly too. She gave her grandsons a big hug and a bag of cookies.
‘Are we going through the church house again?’ Bran asked. Forrest nodded.
They walked quickly and arrived back in the living room where they had emerged.
Bran took out the rune Laguz, which was supposed to help them cross the water to England. In Stonehenge, there was another portal that had a connection with Egypt,
Forrest held the Raido, of travel, and the Eihwaz, of travel between two worlds.
Forrest and Bran hled hands to join the magic.

An Geata seo gu Stonehenge,
(Continue through this Gate to Stonehenge.)
Bran looked surprised because Forrest spoke Scottish Caelic so flawlessly.
There was a flash and they stood between the great stones of Stonehenge
Gu Giza gu sgiobalta, gheibh sinn ar slighe
(On to Giza quickly, we'll find our way.)

The two boys appeared next to the pyramid Cheops, the rightmost of the three, next to Mykerinos and Chephren.
Forrest knew that the Zaeafrans had their residence, under the Great Sphinx of Giza
‘Wow.’ Bran suddenly felt very small at the sight of the twenty-foot-tall Sphinx.
Forrest was also deeply impressed. The culture shock was huge.
It was very hot and the sand made it difficult to walk.
So from the rainy Hintlop to the heat of Egypt took some getting used to. There were many tourists. That was very nice for both boys, so they didn't stand out too much.
‘There must be their entrance somewhere,’ Forrest said. He looked around searchingly.
Bran saw two men in suits, which of course stood out in the heat.
But according to two tourists they asked about it, they were the security guards of the Sphinx of the Pyramids.
The boys knew better.
‘If we can get in there, then what?’ Bran asked. ‘Then they'll feel our magic.’
‘We'll use a cloaking spell then,’ Forrest said, ‘hoping no one discovers us.’
At the foot of the sphinx, the men in suits disappeared.
Two others took their place. Forrest and Bran understood that redemption had been made. ×