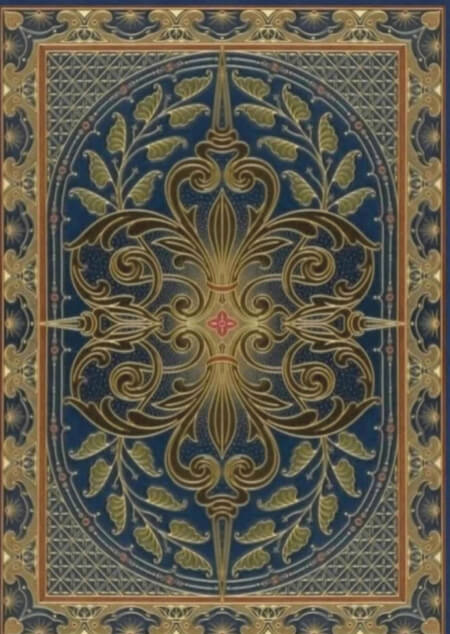 The Workes of Geoffrey Chaucer published by the Kelmscott Press is what the celebrated poet William Butler Yeats calls the most beautiful of all printed books with the richest and most detailed illustrations ever drawn and with the longest history of any book ever written and published in English.
This work of literature is a splendid exposition of the typography, illustrations, and design of the book often cited by authors and publishers not just as the most beautiful book ever made but also as one of the crowning achievements of the art of printing.
At various times a large number of authors, editors, illustrators and designers cooperated over the last seven centuries on the production of this great work of literature, paragon of scholarship and true work of art.

The history of this book begins when at the end of the 14th century from 1387 until 1400 Geoffrey Chaucer writes The Canterbury Tales, that is one of the best loved and most reputable works in the history of English literature.
Geoffrey Chaucer, who is so historically important in the sense that for the first time ever an English author made the audacious decision to write in English and not in Latin, introduces us to a vivid cast of characters, that come from all corners of 14th century society and give the author the chance to speak in many different voices.
Written in Middle English, The Canterbury Tales tells the story of a group of pilgrims, who meet travelling the long journey from London to Canterbury Cathedral, that decide in order to pass the time on the journey to tell the assembled company two tales each, some of which are humorous and frivolous, while others are deeply moral and reflective.
The Canterbury Tales was the first major work of literature written in English, that represents a collection of stories held together by composition in such a way, that several narratives evolve in parallel at the same time within the work.
This formal variation is matched by contrasts in genre and tone, racy fables alternate with sombre descriptions of martyrdom, the compound narrative in which they result is a shimmering variation, that reflects medieval society as depicted by Geoffrey Chaucer.
The interaction between the individual tales and the frame narrative is a layered and masterful exercise in characterisation, that is one of the great virtues not just of Geoffrey Chaucer's work but also of early English literature in general.
The Canterbury Tales is traditionally dated to the end of the 14th century although some tales appear to have been composed before then but the poem as we know it is the work of 15th-century scribes that survives as 92 manuscripts while no existing manuscript dates from Geoffrey Chaucer’s lifetime.

In 1476, William Caxton introduced the printing press to England, revolutionising forever the means books were created.
Published in the same year, this book is the first printed edition of Geoffrey Chaucer's Canterbury Tales and also the first book ever printed in England.
Thanks to the invention of printing, books became quicker to produce and cheaper to purchase but were still a luxury.
An ever-increasing number of writers were able to publish their work, literacy rates rose, language gradually became more uniform, and an early form of modern English began to emerge.
While The Canterbury Tales constitute the main corpus of Geoffrey Chaucer's work, it is not the only work of literature which issued from the author's pen.

In 1861 William Morris persuaded his artist and designer friends to join him in setting up a company to produce quality furniture, printed textiles, tapestries, wallpaper and later also precious books as well.
As William Morris was dismayed by the shoddy quality of mass-produced goods turned out by industrial machinery, what he regarded as a degradation of good taste and everyday life, that also affected 19th century literature, in 1891 he founded the Kelmscott Press, named after Kelmscott Manor, his beloved manor in the Wiltshire countryside.
William Morris, a major figure in the arts and crafts movement, whose device was to have nothing in your house which you do not know to be useful or believe to be beautiful, aimed to revive the former standard and glorious fame of British book printing of the pioneering book printers of the 15th century.
The Kelmscott edition of The Workes of Geoffrey Chaucer set a new benchmark for book design at the end of the 19th century and is now believed to be the ideal book, that is also considered the most beautiful book ever printed.
William Morris worked on the Kelmscott Chaucer relentlessly for four years devoting almost all of his time to this book for which he even designed his own typefaces, made his own paper and printed the pages with his own hands.
The Kelmscott Chaucer is exceptional and unparalleled in its ambitious number of illustrations and rich decorative borders that William Morris designed himself.
On seeing the first copy of the Kelmscott Chaucer the publishers stated that they should have exulted at such an ideal book as students at Oxford University, but they saw only at the end of their days, what they should have published then, so if God were a book collector, the Kelmscott Chaucer would be his favourite book in his collection.
The celebrated Victorian painter Edward Burne-Jones, who illustrated the Kelmscott Chaucer, wrote, that this book is like a pocket cathedral, that is full of detailed design by William Morris, the greatest master of ornament in the world.
The Kelmscott Chaucer is not only the most important of the Kelmscott Press's productions and ultimate achievement of the Kelmscott Press, it is also one of the greatest and most prestigious books of the world.

Last but not least we wish to thank Norman Colbeck, Curator of the Department of Rare Books and Special Collections of the University of British Columbia Library for sharing in high resolution the original illustrations of Edward Burne-Jones.
The Kelmscott edition of The Workes of Geoffrey Chaucer will be the very impressive pride of the bookshelves of real collectors of literature and fine books, who care for the prestige of their home library.
×