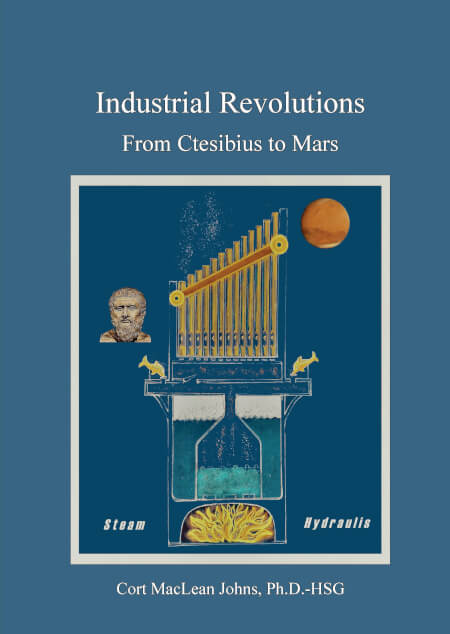 From Ctesibius to Mars

Industrial Revolutions: From Ctesibius to Mars
Arnold Toynbee’s role in coining the phrase, “The Industrial Revolution”
Arnold Toynbee’s Lectures, published in 1884, set forth the thesis that a British Industrial Revolution started in 1776. The academic world has often accepted this date, plus or minus ten or so years, with few reservations concerning the premises that support Toynbee’s concept. Underlying much of what Toynbee writes about James Watt and his steam engine lays a sophisticated argument concerning a technical development that has kept most mechanical engineers and scholars of the history of technology at bay since further analysis requires research into the musical history and science and the literary history of ancient manuscripts. ,

There is a thread of logic binding Arnold Toynbee’s entire thesis for his concept of an Industrial Revolution together with prior scientific experimentation and the parallel development of economic expansion in the late 18th century. Toynbee’s theory, as summarized above, provides a crisp and succinct answer to one of the most complex sets of events within the human experience: man’s ability to create a substitute for human and animal energy through the harnessing of heat energy through his technology. However, Toynbee narrowly defines his concept to events taking place in Scotland and England, largely, if not exclusively, ignoring significant, related steam mechanic predecessors going back to Antiquity.

By combining and commingling the history of both the direct-pressure and vacuum pump types of steam machinery, Toynbee, and his interpreters developed a hybrid theory of steam power development. This theory, historians of technology assimilated rapidly, perhaps, applying “Occam’s Razor” because of its simplicity; they apparently did not examine it with extensive research to validate how the complex industrial developments on the European continent could further verify or refute its claims. Formative industrial events recorded before 1714 and after the ascendancy of King George I (1660-1727) to the throne of England from Hanover conflict with Toynbee’s analysis.

The central thesis of this book is the argument that the Industrial Revolution started earlier than the 1780s and required predating back to 1714. The removal of the artificial chronological constraint from 1604 to 1654 counter-intuitively allows for a longer period of pre-industrialized technological and economic development to take place. With the distorted vacuum arguments put aside, the history of the Hydraulis allows for the precursors of the steam engine to return to their rightful chronological position in the history of technology. The fellows of the Nuremberg Academy witnessed the steam engine’s evolution between 1682 and 1730. By discounting earlier vacuum experiments, but including Papin and Leupold’s direct-pressure steam engine designs in the longitudinal sequence leading up to the Industrial Revolution, they discovered an alternative view for the understanding of the steam engine’s mechanical evolution.
Does history now, or ever before, support Toynbee’s assessment of an Industrial Revolution? Can a better-documented analysis provide a superior claim for it rather being the result of a longer series of evolving technical, economic, cultural and political transformations and intertwining events that shifted the center of overall human activities from an agricultural to a predominately, industrial base in the West?

In labeling this transformation, as Toynbee did in naming it “The” Industrial Revolution, do not historians of technology now need to reassess that conclusion within a wider spectrum of evolutionary changes taking place in the 17th and 18th centuries? Not taking up the challenge to review and suggest modifications to Toynbee’s thesis, by demonstrating that contra underlying arguments, as expressed in the outline above, that subjecting Toynbee’s nomenclature would allow it to remain an open issue subject to eventual logical refutation.

Papin and Evans’ technology called for the application of direct, expanding steam into the power cylinder chamber, to move its internal piston in an upward or outward direction from the part of the cylinder from the source of the steam. However, A.G. Drachmann explains that the basic structural designs of such an engine preceded their achievements by two millennia.

That the commonly termed “Industrial Revolution” bears that name is due to the misperception of its short time for development. To demonstrate, we will delve back into the history of technology to explain our revisionist claim. The popular understanding of the Industrial Revolution relates to James Watt’s vacuum steam engines innovations used as the basis for the beginning of this period. However, its origins date back considerably further in time. We will provide a different account of its origins that takes us to the 3rd-century B.C. when Ctesibius of Alexandria invented the Hydraulis and conducted siphon experiments that advanced steam mechanics further with a broad array of devices created by Hero of Alexandria (10-70 A.D.)

The steam engine’s origin predates even the days of [the Roman Empire and] Emperor, Augustus Caesar, (63 B.C.–14 A.D.) His chief engineer and architect, Marcus Vitruvius Pollio (1st century B.C.) wrote: “De architectura” also known as “The Ten Books of Architecture” that he dedicated to Augustus Caesar providing a complete summary of Greek and Roman architectural and mechanical achievements for surviving from Antiquity.


Figure 3 Image of Vitruvius presenting "D’architectura" to Augustus Caesar
Hero’s Pneumatica carried much of his text down from Philo of Byzantium (Philōn ho Byzantios or Φίλων ὁ Βυζάντιος (285-222 B.C.). In a like manner as Philo before him, he repeated much of what Ctesibius had written in his “Hypomenemata” and “Memorabilia” and possibly other of his writings that are no longer extant.

Ctesibius (Ktesibios or Κτησίβιος) invented the Hydraulis and was a leading member, if not the director, of the Engineering School of Alexandria during the time of Ptolemaîos Philádelphos (Πτολεμαῖος Φιλάδελφος, 309–246 B.C., who reigned from 283 to 246 B.C.).

The Hydraulis embodied and reified the technical realization of the Pythagorean theory of “the harmony of numbers” and his experimentation with the vibrating frequencies of stringed instruments. Compressors, reciprocating piston pumps, check valves, instrument keyboards, organ pipes, and cylinder engines have evolved from his designs of the Hydraulis and pneumatic and hydraulic pumps.
Euclid and Ctesibius, Music Theory of Instrument Construction and the Hydraulis

Euclid (325-265 B.C.) and Ctesibius (285-222 B.C.) were near contemporaries associated with the Library and Museum of Ancient Alexandria. It is not known whether they ever met in person. Certainly, Ctesibius would have been aware of, if not the possible simultaneous presence of the great mathematician, Euclid, his famous “Elements” held by the Library of Alexandria.

Of course, Euclid is best known for his ground-breaking work in Geometry, however, Euclid also wrote on music theory expanding on the earlier concepts of Pythagoras. In his Book VII, Proposition 1, Euclid wrote of what has become known as “Euclid’s algorithm”.

How useful could a mathematical technique [Euclid’s algorithm] from the third century BC be to a 17th-century musician? Very useful indeed, it turns out. Euclid's algorithm provides a way of dealing with equations of musical pitch, potentially helping musicians and instrument makers to tune musical instruments.

Interestingly, Euclid’s algorithm surpasses its older applications from Ctesibius to Watts for the analysis of 20th and 21st-century usage.

Euclidean rhythms also find application in nuclear physics accelerators and in computer science, and are closely related to several families of words and sequences of interest in the study of the combinatorics of words, such as mechanical words, Sturmian words, two-distance sequences, and Euclidean strings, to which the Euclidean rhythms are compared.

However, machines like the Archimedes Screw were not suited to Euclid’s own preference for geometry theories and diagrams.

Had this been Euclid studying spirals, the Archimedes Screw would have remained a geometrical idea; thanks to Archimedes it became a practical tool that survived over two thousand years intact.

In a similar manner, Euclid most likely provided the music theory that allowed Ctesibius to design and fabricate the Hydraulis’ organ pipes or Steam Hydraulis in one of the three Greek scaler modes, Diatonic, Chromatic, or Enharmonic. Similarly, Euclid’s algorithm would be taken into consideration in designing and fabricating future pipe organs and calliopes.

It turns out that Gottfried Wilhelm Leibniz’s correspondence with Conrad Heftling concerned Euclid’s “music theory and the details of how to tune musical instruments.” The obvious question arises whether Ctesibius used Euclid’s music algorithm to determine the length of the organ pipes he fabricated in the Hydraulis. Stated another way, could Ctesibius have analyzed the lengths of these pipes without using Euclid’s algorithm? Certainly, by analyzing the extant pipe lengths of the Hydraulis artifacts located at Aquincum and Dion might determine whether they conform to Euclid’s algorithm theory might settle my hypothesis, ergo, that Ctesibius applied Euclid’s algorithm in determining the length of the Hydraulis organ pipes. Therefore, almost 2,000 years later, Leibniz’ understanding of Euclid’s algorithm may have assisted in his mentoring of Denis Papin in designing the first two Steam Engine prototypes in 1690 and 1707.

However, in Robert W. Smith’s “Harmonics”, upon which James Watt relied heavily to construct 2 pipe organs for the Masons’ Lodge in Glasgow, Scotland. In this work, Smith cites Euclid at least 5 instances. Thus, as with Leibniz and Papin, Euclid’s algorithm is present in the mind of James Watt as well and in his writings on music theory that form a continuum from Pythagoras to Euclid and Ctesibius, to Leibniz and Papin, and onto Robert W. Smith and James Watt. The connection with music theory and mechanical construction from Ctesibius’ Hydraulis, to the Leibniz/Papin Steam Engine prototypes and onto the mathematical instrument maker James Watt is consistent from the Hellenistic Period through to the (Latent) Industrial Revolution of the 17th and 18th-centuries.