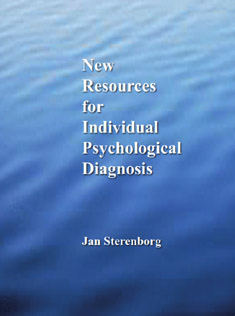 Introduction
When Sigmund Schlomo Freud postulated that unconscious forces were
active in every human being, psychology as a science was born.
From there on numerous developments were started which more and more
took the form of scientific research and experimentation.
Can we prove what we claim? Can we establish key facts concerning man?
This line of development reach the point that the unconscious was totally
abandoned as unreliable.
But what is unreliable?
The interpretation of the unconscious or the unconscious itself?
In this paper the unconscious is treated as the absolute reliable source of
knowledge and experience in every human being and the question to be
answered becomes:
How can we let the unconscious speak in a conscious way?
A circle is completed: the unconscious and the conscious come together in a
subtle interplay. This approach provides us with information about this
individual human being.
The described method will be called: Individual Psychological Diagnosis
(IPD).
Man stays a mystery
We will know more and more about people, but there will always be,
paradoxically, more things we do not know. And even though the manual
for psychiatry (DSM) becomes three times as thick, it will not solve things
substantially (see first part of Stranger at Killknock). ×