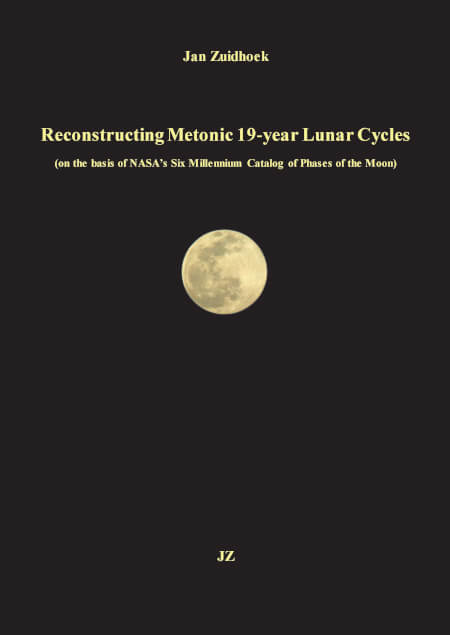 Summary
It is the development the Alexandrian computus underwent which formed the mainstream of the history of the computus paschalis that had risen in third century Alexandria (Egypt) to ultimately flow into the modern method of determining Gregorian calendar dates of Easter. Between the construction of the very first Metonic 19 year lunar cycle by the Alexandrian computist Anatolius (between AD 250 and 270) and the replacement of the Julian calendar with the Gregorian calendar (in AD 1582, turning point in the history of chronology) it was only once, namely shortly before the first council of Nicaea (in AD 325, turning point in the history of Christianity), that in Alexandria a completely new Metonic 19 year lunar cycle was constructed, like its predecessor directly or indirectly on the basis of at the time recent lunar tables, but according to a different set of computistical principles. After having reconstructed both of these lost ante Nicene Metonic 19 year lunar cycles, we establish that:
1) the first of them (referred to as ‘Anatolius’ 19-year lunar cycle’) is equal to the proto-Alexandrian 19-year lunar cycle reconstructed in 2009;
2) the second of them (referred to as ‘the archetypal Alexandrian 19 year lunar cycle’) is nothing but the archetype from which after AD 325 one after another each of the three well known post-Nicene Alexandrian Metonic 19 year lunar cycles was obtained either by adopting the very same Metonic structure of the archetypal Alexandrian cycle or by moving its saltus 1 year afterward or 2 years forward (see Table 8);
3) the cause of the 2-day gap between them (referred to as ‘the ante-Nicene Alexandrian 2-day gap’) must be sought in the transition from the more Jewish Christian world of the third century to the more Gentile Christian world of the fourth (as a result of which Alexandrian computists began to use the Egyptian lunar calendar more familiar to them instead of the Alexandrian version of the Jewish lunar calendar);
4) both the first of them and the sequence of Paschal dates generated by it according to the old Alexandrian Paschal rule have de facto lower limit date 23 March;
5) the second of them has de facto lower limit date 21 March but the sequence of Paschal dates generated by it according to the new Alexandrian Paschal rule has de facto lower limit date 22 March (the same applies to the well-known three post Nicene Alexandrian Metonic 19-year lunar cycles).
We conclude that Anatolius can be considered to be the founder of the efficient Alexandrian Metonic 19-year lunar cycle method of determining Julian calendar dates of Paschal Sunday from which after the Gregorian reform in AD 1582, after preparatory work by the Italian astronomer Luigi Lilio, the German mathematician Christoph Clavius would develop a modern system for determining Gregorian calendar dates of Easter.
×