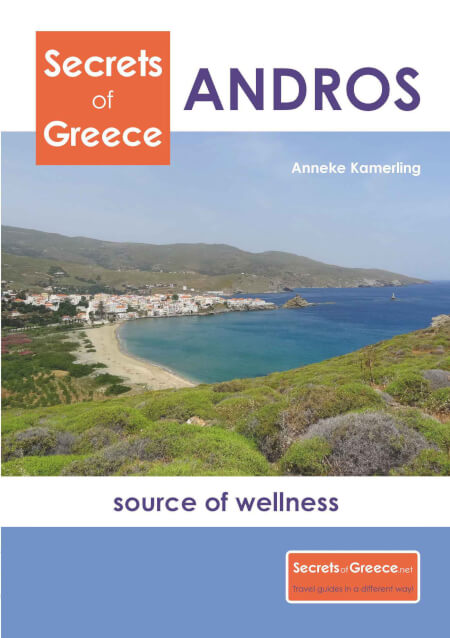 Andros, with an area of 374 km², is the second largest island in the Cyclades. It is located in the Aegean Sea, at about 2 hours by boat from Rafina.
The interior is mountainous with its highest peak being Kouvara (997 m), which can be seen from almost anywhere on the island. Thanks to many springs, streams, and even waterfalls, the island has lush vegetation and is therefore ideal for short and longer hikes.
Inland and scattered along the coast are picturesque villages. The island has about 8,500 inhabitants, of which about 1,500 live in the capital Chora. Nowadays, the population increasingly lives on tourism, but agriculture is still an important source of income for the Andriots. A lot of fruit is grown in the valleys. In the mountainous region on the northern half of the island, people mainly live from livestock farming (cows, pigs, sheep, and goats). However, the main source of income is the services industry, of which shipping is an important part.
Chora is the island's capital and a typical Cycladic town with white and pastel-coloured houses with doors and shutters painted in contrasting colours.
The island has many beautiful sandy and pebble beaches along the entire coastline.
According to mythology, the island was named after Andros, Apollo's grandson.
The history of Andros traces back to prehistoric times. Remains from ancient times have not been found much, but some beautiful churches and monasteries from the Byzantine period have been preserved.

For several years now, there is tourism on Andros. There are hotels and apartments in class A to E, which are spread all over the island. Furthermore, the island has good dining options and a pleasant nightlife.
The beautiful beaches, the picturesque villages, the lush, untouched nature, and the fascinating sights make the island an ideal place for the holidaymaker. ×