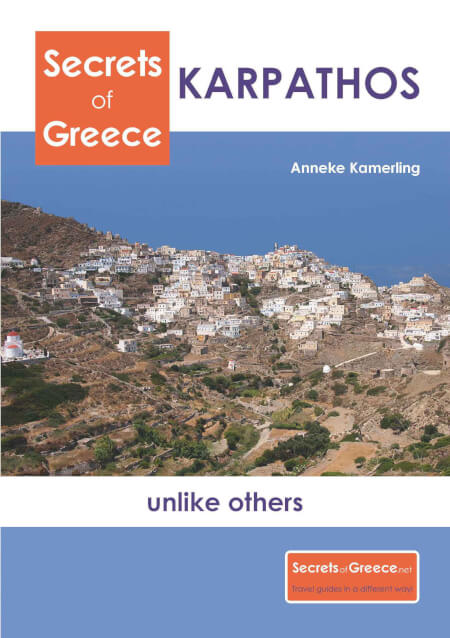 People have not really found their way to the island of Karpathos yet. It is beautiful, with rugged scenery much of which was unfortunately destroyed by fire, but it has made a good recovery in recent years. The island is ideal for all kinds of walking tours. The villages are picturesque, tucked away in the mountains, in contrast with Karpathos town and its modern buildings situated around the bay of Vronthi on the east coast. The island has roughly 6,000 inhabitants. Nowadays the population depends mainly on tourism for a living, but agriculture is still a substantial source of income to the Karpathians.
It has become easier to get to Karpathos in recent years so that tourism is now well on its way. There are hotels and apartments in class A to E, mostly in or around Karpathos town and you will find friendly guesthouses all over the island. There are many attractive restaurants and cafes in the town but no real nightlife. Many old traditions have been handed down from generation to generation on Karpathos, especially in the barren northern part of the island, which used to be almost completely isolated from the rest of it.
There have been no spectacular finds of ancient Greek remains yet. However, archaeologists are busy with excavations all over the island. A statue from around 3000 BCE is found in Karpathos town. A female figure, which appears to be Mother Nature. This is kept at the British Museum in London. You can visit an archaeological site from the 4th century just outside the town. There are several mosaics from the same period on the other side of the island near Arkassa. According to tradition many historical treasures are still waiting to be found on the island. This makes it an interesting place for amateur archaeologists, but we must warn you not to take any finds home with you, as the penalties for this are most severe.

In short, Karpathos is the ideal spot for holidaymakers in search of peace and quiet: an island with wonderful beaches, pretty villages, and unspoilt scenery. ×