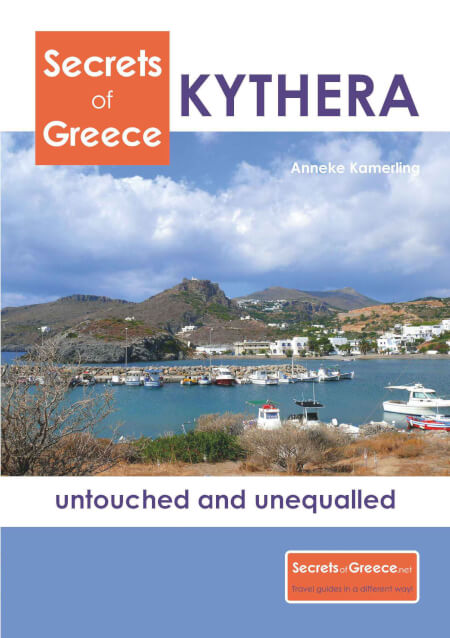 The singer Katsaros already sang about this nice island: "Kythera, we will never find it!" But whoever found it cannot be happier.
Kythera, with its inviting rolling countryside, overgrown with fragrant vegetation and adorned with numerous chapels and breath-taking sea views everywhere, a piece of paradise on earth!
Although Kythera is part of the Ionian Islands, it is architecturally and scenically very similar to the Cycladic Islands and belongs to the administration of the municipality of Piraeus, which is no less than 105 nautical miles away.
Kythera has less than 3,500 inhabitants, spread over 64 villages and hamlets.
Chora, the island's capital, is an interesting mix of typical Cycladic architecture with block-shaped white houses and Venetian influences, such as the Kastro, which towers over the town.
The island population mainly lives from agriculture and livestock. With the advent of tourism, more and more Kytherians see tourism as a new or additional source of income. The accommodations, from simple to comfortable, are spread all over the island. The island does not have a really busy nightlife, but there are many good restaurants and nice cafes.
The almost 80 km long coastline consists mainly of rocks, interspersed with beautiful beaches in large and smaller bays.
In mythology, Kythera is mentioned several times, and there are clear traces on the island of its eventful history, including finds from the Minoan era, Byzantine churches and monasteries, remains of Venetian fortresses, and various structures built by the English when they held sway on the island.

The picturesque villages, unspoilt nature, and interesting sights in combination with the wonderful, quiet beaches and the friendliness of the population, make the island an ideal place for holidaymakers. ×