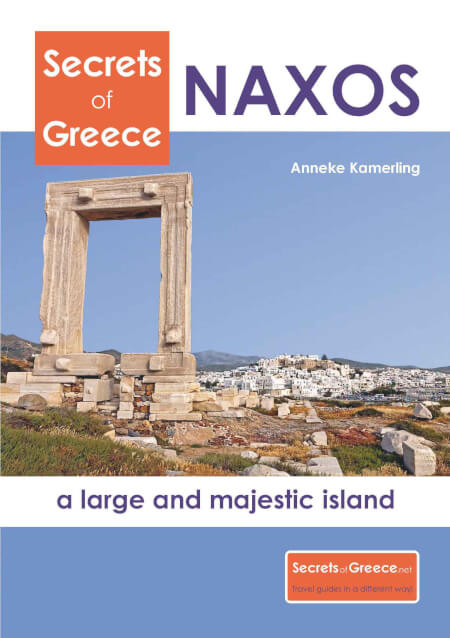 a large and majestic island

With an area of 448 km², Naxos is the largest island of the Cyclades. It lies roughly in the middle of the Cyclades archipelago in the Aegean Sea. The mighty mountain range, the Zas (1001 m) dominates the interior and can be seen from almost anywhere on the island.
The island is ideal for short and longer hikes. Especially the Tragea Valley is an Eldorado for hikers.
Various picturesque villages are somewhat hidden in the mountains and scattered along the coast.
The island has about 15,000 inhabitants, of which about 7,000 live in Naxos town. The population nowadays increasingly lives on tourism, but agriculture is still an important source of income for the Naxians. Naxos is the most fertile island of the Cyclades, and a lot of fruit is grown in the valleys. In the highlands, people mainly live from livestock (sheep and goats). Also, marble and emery are mined on the island.
Naxos town (or Chora) is the island's capital and a typical Cycladic town with block-shaped white houses and doors and shutters painted in contrasting colours.
The island has beautiful large sandy beaches and dunes along the coast.
In mythology, Naxos is mentioned several times and there are clear traces on the island of its eventful history, including the famous Portara of the Apollo Temple.

Tourism on Naxos has been going on for several decades. There are hotels and apartments in class A to E, which are spread all over the island. Furthermore, the island has nice eateries and cosy cafes. However, it does not have a really busy nightlife.
The beautiful sandy beaches, the picturesque villages, the unspoilt nature, and the large number of attractions make the island an ideal place for the holidaymaker. ×