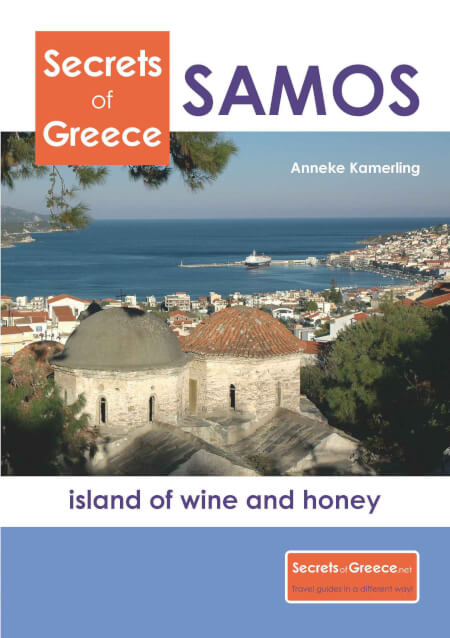 island of wine and honey

Samos, known for Pythagoras, famous for its wines, and praised by Herodotus. The philosopher Herodotus wrote as early as 460 BCE, when he lived on Samos, that he found the three most impressive buildings in Greece on the island. The ramparts of Polycrates, the temple of Hera and the tunnel of Eupalinos. Samos is a varied island with opportunities for young and old.
Samos town, the island's capital, is a lively place around the sheltered bay of Vathi on the northeast coast of the island. The town has a large harbour with a bustling boulevard. Furthermore, the island is rich in, villages and hamlets, which are spread all over the island, from close to the coast to deep inland.
The island has a lush nature, which gives it the reputation of being an ideal hiking island. The north of the island is mountainous and green. The steep rocky coast is regularly interrupted by small bays with beautiful pebble beaches. The interior is characterized by mountain ranges with heights of over 1,000 m. The highest peak is the Vigla (1,443 m) in the Kerkis Massif, in the west of the island. The south coast has both sandy and pebble beaches and, in addition to the steep rocky coast, also extensive plains, where a lot of agriculture is practiced. Samos has about 40,000 inhabitants, of which about 9,000 people live in Samos town. The population mainly lives from agriculture, especially viticulture, but nowadays tourism is also an important source of income for the Samians. The island is rich in monasteries worth seeing and interesting archaeological sites.
The Hera Temple near the village of Ireon is the most famous excavation and well worth a visit. The history of Samos goes back to prehistoric times. Findings from this period are housed in the Mytilinoi Paleontological Museum. The Hera Temple dates from the 13th century BCE and there are Byzantine chapels and remnants of medieval walls all over the island.

Tourism has been going on for several decades. Some tourist towns besides Samos town are: Pythagorion, Kokkari, Ireon, and Votsalakia. Here you will find hotels and apartments in class A to E and various entertainment options, such as restaurants, bars, discos, and clubs. Samos offers the tourist every comfort, beautiful nature, and many sights. It is an ideal island for holidaymakers who want to combine culture, nature, and adventure while enjoying the tranquillity, the original Greek atmosphere, and the hospitality of the friendly population. ×