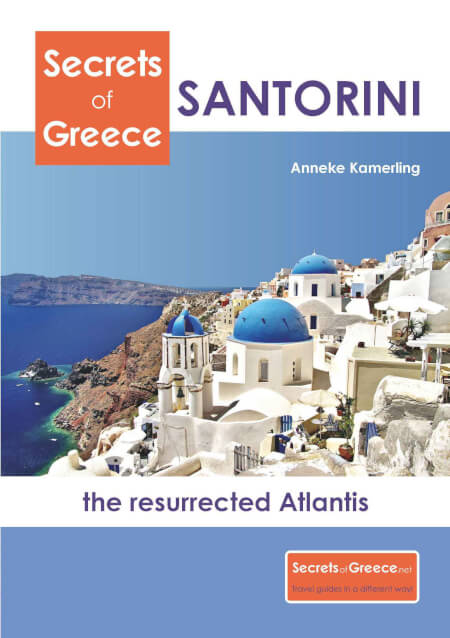 The world-famous island of Santorini is called 'Thira' by the Greeks themselves. Santorini is the Italian name, given during the Venetian administration, after the island's patron saint, Agia Irini (Santa Irene).
Santorini is unique both in shape and landscape, which are the result of centuries of volcanic activity. Actually, the whole island is a volcano, which is still active to this day. The island is partly mountainous, with a very steep west coast, but there are also flat areas, mainly in the eastern part. The volcanic soil is very fertile and is used for the cultivation of fruit and vegetables and the production of high-quality wines with a special taste.
Santorini has about 13,500 inhabitants, spread over seventeen villages. Fira, the island's capital, is a typical Cycladic town with block-shaped white houses and doors and shutters painted in contrasting colours. The island has a unique architecture, in which natural conditions have been used in an ingenious way.
The population mainly lives from tourism, but agriculture, especially viticulture, is an important source of income for the Santorinians.
Tourism in Santorini has been going on for several decades. There are hotels and apartments in class A to E, which are spread all over the island. Furthermore, the island has a pleasant nightlife with many good restaurants and nice cafes and bars.
The island has some beautiful lava beaches, especially on the east and south coast.
In mythology, Santorini is mentioned several times, and there are clear traces on the island of its turbulent history, including the famous excavations of Akrotiri and prehistoric Thira.

The picturesque villages, the rugged nature, and the large number of attractions in combination with the black lava beaches, make the island an ideal place for the holidaymaker. ×