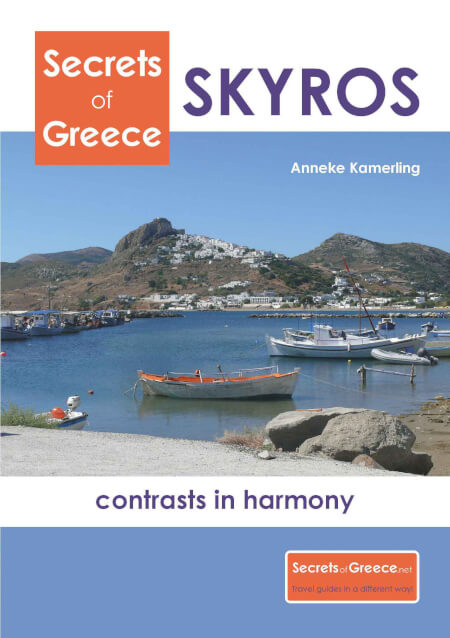 Skyros, with its varied rolling landscape, overgrown with fragrant vegetation in the north and rugged and unspoilt in the south, with numerous chapels and breath-taking sea views everywhere; a piece of paradise on earth!
The island belongs to the Northern Sporades archipelago in the North Aegean Sea and has about 3,000 inhabitants. The island population mainly lives on agriculture, livestock, fishing, and crafts. Nowadays, more and more Skyrians see tourism as a new or additional source of income.
The villages are scattered in the mountains, especially in the north of the island, and along the coast. Actually, 'village' is a big word for the hamlets on Skyros. They often do not consist of houses built closely together around a square with a central church, as is the case on many other islands, but usually it is just scattered houses between fields, where agriculture and livestock are practiced.
Chora, the island's capital, is located on the east coast. This town is built like a typical Greek village against a steep rock face. It is an interesting mix of block-shaped white houses and Byzantine and Venetian influences, such as the Kastro, which towers high above the town.
Tourist accommodations, from simple to comfortable, can be found on the northern half of the island. The island does not have a really busy nightlife, but there are many good restaurants and nice cafes.
The almost 130 km long coastline consists mainly of rocks, interspersed with beautiful beaches in large and smaller bays.
In mythology, Skyros is mentioned as the island where Achilles hid to escape the battle of Troy. And clear traces of its eventful history, including many Byzantine churches and monasteries can be found on the island.
Unique to Skyros are the wild horses, which roam around freely on the island.

The picturesque town, the unspoilt nature, the interesting sights in combination with the wonderful, quiet beaches and the friendliness of the population, make the island an ideal place for the holidaymaker. ×