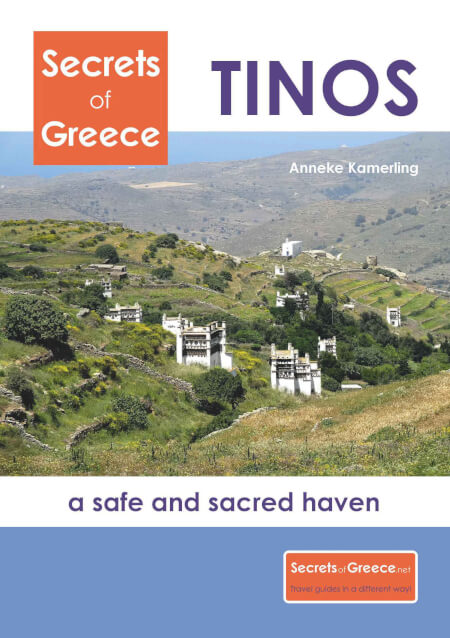 a safe and sacred haven

Tinos belongs to the Cyclades archipelago and is located between the islands of Andros and Mykonos in the Aegean Sea. It covers an area of 195 km². The interior is mountainous with the highest peak being the Tsiknias (727 m), which can be seen from almost anywhere on the island.
The rugged landscape is occasionally interrupted by small green oases. The many characteristic pigeon houses are striking. There are 64 traditional picturesque villages, which are relatively close to each other.
The island has about 8,500 inhabitants, of which about half live in the capital Chora. The population today increasingly lives on tourism, but agriculture, livestock, and fishing are still an important source of income for the Tinians. However, the main source of income is the service sector, not to mention marble extraction and processing. Tinos' green marble has been quarried since ancient times and was used in, amongst others, the construction of the Louvre in Paris and Buckingham Palace in London. The island has been known for years as an artist's island.
Chora is the island's capital. It is a pleasant place where the typical Cycladic houses are interspersed with modern new constructions. The centre is dominated by the Panagia Evangelistria Church, which makes the island the religious pilgrimage site of Greece and attracts many domestic and foreign visitors each year.
The island has many beautiful sandy and pebble beaches along the entire coastline.
In ancient times, Tinos was called 'Ophioussa' ('ophis' = snake) because of the large number of snakes on the island. According to mythology, Poseidon sent the snakes off the island and to show their gratitude, the islanders built a temple for him in Kionia. In mythology, the island is referred to as the seat of Aeolos, the god of the winds.
The history of Tinos traces back to prehistoric times. In addition to ancient remains, numerous chapels and some beautiful churches and monasteries from the Byzantine period have been preserved.

Tourism on Tinos started several decades ago. There are hotels and apartments in class A to E. Furthermore, the island has good eateries and a pleasant nightlife. The season (June-September) is short. Out of season, museums, eateries, and tourist shops are closed.
The lovely beaches, the picturesque villages, the unspoilt nature, and the fascinating sights make the island an ideal place for the holidaymaker. ×