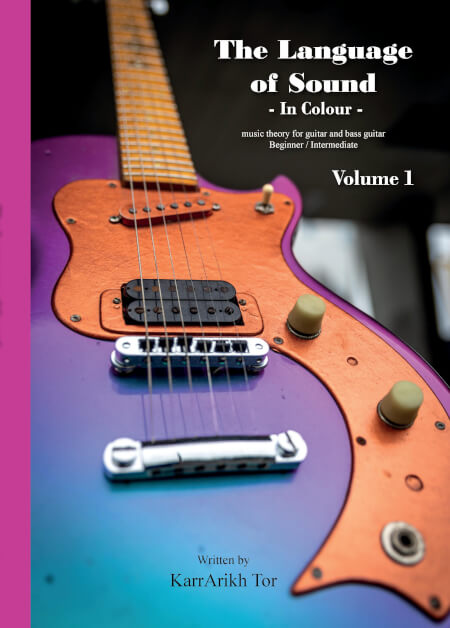 The Language of Sound – in colour – Volume 1

To summarise Dividing the Octave, on a piano keyboard there are no black keys between the B and C notes and the E and F notes. The black keys are named with letters and a sharp or flat symbol. The symbol for a sharp note is ♯, and the symbol for a flat note is ♭. Notes can have more than one name (this will be expanded later on). Each black key commonly has two names, one sharp and one flat. This is one of the first areas of Music Theory where we just need to memorise. It is uncommon to divide anything like we divide octaves; it is only found in Western Traditional Music.

Writing the language onto paper
If we have a melody in our head and wish to write it down, knowing the notes which make up the melody can help us record it to paper. We begin looking at the song “Twinkle Twinkle Little Star”, because we can play this melody with just six notes. If we begin our melody on the C note, the melody goes:

Each letter stands for one performed note in the song (even though nothing in our notation tells us this). If a performer knows this melody, they would be able to play the song from this notation, but only in the manner they think it should be. Two people may have two different views on how the melody should sound. If we did not know the song, we would not know the octave that each note should be played, nor understand how fast or slow the notes should be played. If a writer wishes to make a quick notation for their own use, using a simple method like this may work, but information is missing. All the notes look the same length in this manner; the timing of the melody is missing from our notation. The original melody has the first note as the lowest note in the melody. We could write:

This may show the melody rising from the C note and may give the impression that all note durations are not the same (with the dash used in our layout), but it is still vague and unclear. Music Theory gives us suggestions how to show notes clearly, in a uniform manner that can be read and performed by many instruments. Notice how clean Twinkle Twinkle Little Star can look when written onto a treble staff. Now we can see that all notes are not the same.

So far, we have learned it is possible to write a progression of notes onto paper using only letters with octave numbers, but this method looks unclear in writing long progressions or using more than one note at a time. Two instruments performing together need to see their parts clearly and quickly. Music Theory uses a Staff to write notes down. A Staff is five lines running parallel across a page.

Each line and space represents only one note, a single frequency. A single staff can also be referred to as a stave, but two or more are called staves, not staffs. To read a staff and understand the notes, we need to define how a staff is used.

Symbols are placed at the beginning of the Staff, to tell us what notes the lines represent. A Grand Staff has two staves placed on top of each other and joined on the left and right side, for a total of ten parallel lines (eleven lines if we include the middle C). We read a staff from left to right and a sheet of music is read from top to bottom.
Notes on a piano are comparable to notes on a guitar fretboard and on the Grand Staff. The top five lines record higher pitched notes, while the lower five lines record bass notes. Once a melody is written onto staff paper, the octave number is no longer written down. Both the octave number and the letter name of a note are known by the placement of the note symbol on the staves. Each line or space (between two lines) represents one letter. These lines and spaces represent white keys on the piano keyboard.
×