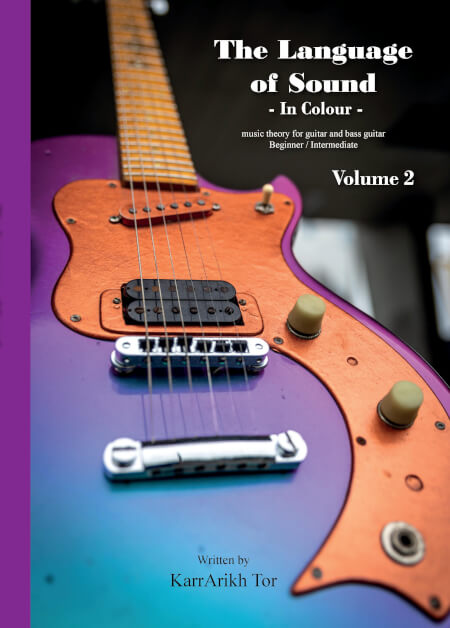 The Language of Sound – in colour – Volume 2

We studied Intervals in Volume 1, Chapter Three. These are the foundation of chords with 3 or more notes in them. Triad chords may only use the Major and minor third intervals, but other intervals are needed when we extend our triad chords into Sevenths and beyond. First, we will study the triad chord. Using the Major and minor third intervals we can create four types of triads: the Major triad, the minor triad, the diminished triad, and the augmented triad.

Numbers used to name the notes in a chord come from counting two octaves in a row. The 2nd and 9th notes are the same note (shown in different octaves on the staff). So are the 4th and 11th notes, and the 6th and 13th notes. This is important to remember in understanding chord notation.

We called the first note in our Major scale the tonic note. Like the Major scale, a chord is also built from a single note. We call the first note in our chord the “Root” of the chord. Looking at scales and chords can get confusing. Here is where we can no longer use a number placed next to our letter to represent the octave that the note appears in. The Grand Staff will have to be used to represent the octave of a note. A chord is named by a letter which is sometimes followed by a number. The number of a chord should be written in superscript font, as in the notation C7. When there is no superscript available, normal font size numbers can be used, using a C7 instead of the C7. This looks like an octave number from Volume 1, Chapter One, which is why the octave number of a note needs to be represented by use of a staff with a clef stating the octave.

When we look at a chord, we always discuss the chord quality from the Root note, regardless of the Key scale which accompanies the chord. This gives us two ways to approach examining our chords. There are chords that naturally appear in a Major Key scale, using the scale degrees to define each chord. This is one way, but it does not represent all the possible chords we can build from our root. If we examine all the possible chords that we can build using one Root note, we can create dozens of chords which would apply to many different Key scales. This is where we will begin.

We studied the Key of C Major to learn about Major scales because all the scale degrees were natural notes. Keeping the same starting point in studying chords will help reinforce the pattern of the chord. Therefore, we will first study all the C chords. When a guitarist plays these chords, it is never as obvious which fret is sharp or flat from the natural notes in our Key. We will use the piano keyboard to help see the overall patterns to building chords. A pianist would not necessarily play all the notes of a chord in the order this text will show. It is more likely they will play an inversion of a chord. An inversion of a chord is playing all the notes in a chord, but not in the order we will first study them. When stacked, the first order of a chord begins with the root on the bottom. When the C note is played higher and the E note is the bottom of the chord, we call the chord a C/E. This means the chord is a C Major chord, but the E note is the bass of the played chord. This is the 1st Inversion of the C Major chord. When both the C and E notes are higher than the G note on the staff, we write the chord as C/G as the G note is now the bass note of the chord. This is the 2nd Inversion of the C Major chord.


Guitarists play chord inversions regularly. A standard guitar has six strings, and a triad chord only needs three of them. When we use all six strings to play a Major or minor chord, notes get doubled. Our chord now has added unison intervals. This makes the chord sound fuller, adding harmonic resonation into our chord. A guitarist or bassist can play up to three unison notes of the same octave. A pianist cannot do this. A piano can only add a unison note from another octave. There is nothing wrong in adding unison notes to our chords, but we also need to remember that the chord only needs three separate notes. We will examine how chords look on the guitar and bass fretboards later in this text.

To summarise What is a Chord, a chord is the harmony of two or more notes played at the same time (resonating simultaneously creating added harmonics). Two notes combined are called an Interval (which we introduced in Volume 1). Three notes stacked are called Triad chords. These common chords are built by stacking 2 intervals on top of each other. Combinations of Major third intervals and minor third intervals are used to create our four basic triad chords: Major chords, minor chords, diminished chords, and augmented chords. The notes in a chord are numbered and spaced in the same manner as scale degrees are. The first note in a chord is called the Root of the chord (where scale degrees begin with the first note called the tonic note). We will learn these chords in order as they are stacked on the staff, with the root on the bottom of the chord.
×