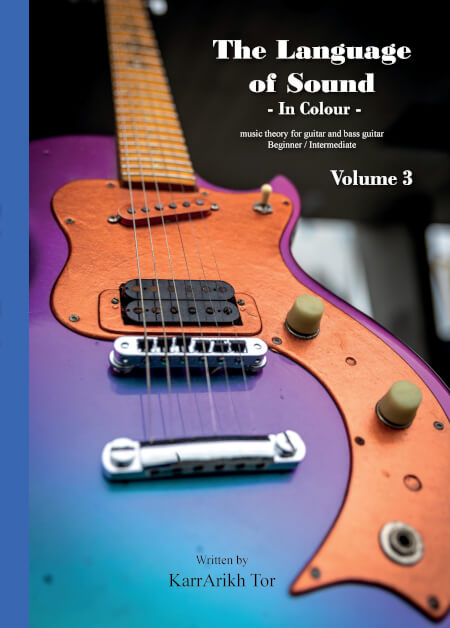 The Language of Sound – in colour – Volume 3

Adding Chord Arrangements to a melody
I-IV-V7 chord progression in C Major
Adding chord progressions to a written melody can be approached in more than one way with varying results. We have discussed the strength of working with a I-IV-V Major chord combination in earlier Chapters. This example uses a V7 chord instead of the Major triad V, giving us a I-IV-V7 chord progression. We will first work with adding an arrangement of 3 instruments to build triad chords around our melody. We will continue to work with Twinkle Twinkle Little Star in the Key of C Major. In Volume 1, Chapter Three we learned how Twinkle Twinkle Little Star fits the Major scale with the first and last notes of our melody being the first scale degree of our Major scale. A common I-IV-V7 chord progression used with this song is:

Here we compare the notes of our melody with our chords. Because of where the chords were drawn on the staff, the D note in our G7 chord is played an octave higher than seen in our main melody. Notes are shown in the same scale degree colours which were used in earlier Chapters.

Adding Bass to our I-IV-V7 chord progression in C Major
Bass guitar, like any other bass instrument, needs to reinforce the Root note in the chords of the progression. This does not mean the Root is the only note a bass instrument can add, but it is the main note to be added and should be played an octave lower than notes from other instruments in the arrangement. If an inversion of a chord is to be played, the bass instrument should reinforce the new bass note of the chord (which are the 3rd or 5th interval notes in the inversion form of a triad chord). We will not be working with inversions in this progression so the main bass notes we will add to Twinkle Twinkle Little Star are the Root notes of the chords.

The second of our rhythm instruments is a Viola playing a G note with C Major chords, an A note with F Major chords, and a D note with G7 chords. Viola begins on the 28th measure. It is not until the viola joins that we can hear a full triad chord accompaniment.

These are the last staves for Twinkle Twinkle Little Star in C Major
with a I-IV-V7 chord progression.

Rhythm instruments will usually play more notes of shorter durations, like we mentioned the bass guitar will play, depending on the style and genre of the performance.
This progression has the V chord with an added 7th note, a V7. The progression does not need this added 7th note and the melody could have been accompanied by just the 3 Major triad chords of the Major Key. All the notes which make up the triad chords are listed above the notes on the lower staves, below the chord symbol (which are above all the staves). For the G7 chord, one of the instruments needs to play the fourth note in the seventh chord. Here the guitar plays the extra note, playing an interval containing the 3rd and 7th notes of the chord. For continuity in the overall arrangement of the guitar progression, an F note was also added to the C note (played with the F Major chord). The F note is the 1st in this interval along with the 5th of the F Major chord or IV chord in our progression. ×