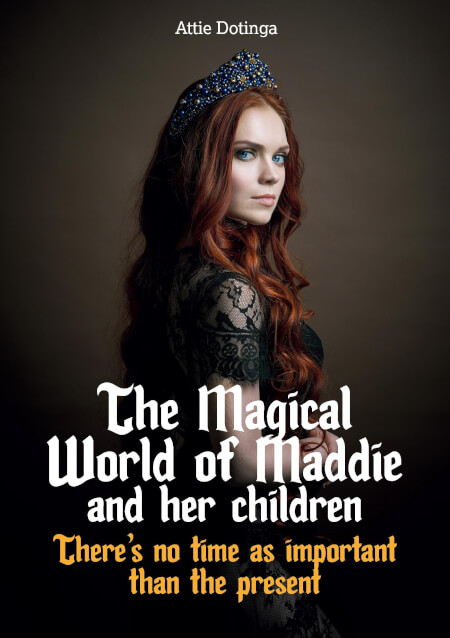 The Magical World of Maddie and her children

book 4 There is no time as importent as the present

With a wave of the hand, the magic died out.
She did realize that her children were no longer allowed to carry magic with them.
She hesitated for a moment, but then she concentrated on her inner self. With each deep breath, green energy swirled up inside her, filling her, until it came out of her pores. It filled the library, the hall, the rooms, the bedrooms and circled her children.
Then it went into her daughters and her sons and when it came out again it seemed like some kind of wok was being pulled along.
The energy eventually returned to her.
When the green forest magic returned to her, she felt the entrained magic raging inside her. For a moment her body could hardly handle the energy, but the red moon energy inside her circled it and absorbed it so she could carry it.
When Maddie came to herself again, she felt the tears rolling down her cheeks. She had stripped her children of all magic and their memories of it. It hurt her mother's heart because she had cut off a part of who they were.

Willow suddenly stood behind her.
"Is all the magic gone?"
"Of my children. But for yours, I want your permission.”
Maddie wiped her tears and saw them in Willow's eyes too.
"Go on," she said. “They have to be safe at all costs.”
Marge nodded.
She repeated the procedure, only then sent her magic to Willow's house and pulled little Björn and Bran's magic out of them.
"It's okay Maddie," Willow said softly, taking her friend's hand. "Really, we need to protect them. They should be able to continue living their lives among people.”
Marge nodded. "I know but it just hurts me so much as a mother that I have to do it. And that's why we also need to make sure we grab whoever is causing this.”
"And our magic Marg?"
"Together with Raven, I could make all the magic in the world disappear. But that's the very last thing we'll do, Willow. When the magic disappears, the balance in the world also disappears. In the whole world. Everything influences each other. I don't know what will happen then. It is already the case that what is now reappearing in the history books has a major impact on the balance.”
Willow looked at her. Maddie had a serious look in her blue eyes.
"Could you do that then? I mean to rid the whole world of magic?”
"Yes, we can if we have to. It's not for nothing that we bear the responsibility for the entire magical world on our shoulders Willow. But it is the very last resort.”
×