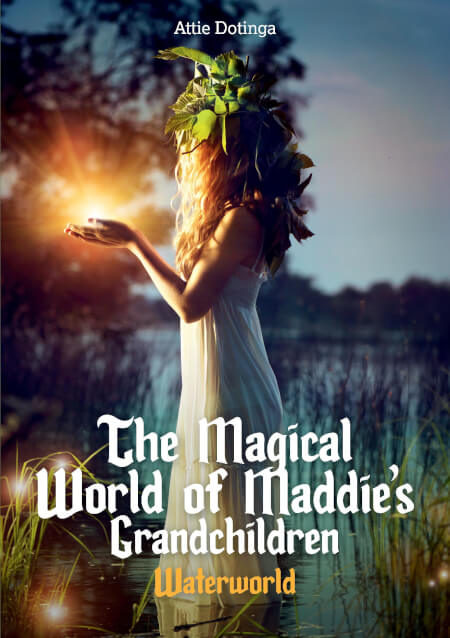 The Magicalworld of Maddies Grandchildren part 9

She walked along the water.
Her gaze stared at a point in the distance of her memories. Those memories brought a painful look to her face.
She saw the brilliance of the water and suddenly it attracted her irresistibly.
The water called. If she disappeared into it, all her pain would drown and she would never have to feel it again. Nothing more to know.
Her feet walked naturally to the quay. The high city wall would hide her from view. Then no one would interfere. Besides, there was no one who would be sad anyway.
Who cared what she felt deep inside? Only she knew that deep pain, that rejection, the betrayal. The feeling of knives in her back.
She stepped over the edge of the quay and felt the water take her in.
It felt wonderfully cool and that was good, then it would go quickly.
She looked up and saw the old city tower that had once been an entrance to the city. She let herself sink down and the greenish canal water closed above her, it became dark.
But then suddenly the resistance of her body came up, the body that wanted to live, and she swam up again. The lack of oxygen made her fight for her life.
Suddenly her foot caught on old rusty junk that had once been thrown in the water. Was it a bicycle wheel? She panicked. The will to survive made her fight to go up to fill her lungs with oxygen. But it didn't work!
She moved wildly, but she couldn’t go to the survive.
Just as she gave up and was about to give in to breathing underwater, a strong arm grabbed her. Just before she lost consciousness.

She opened her eyes because the constant beeping she heard irritated her. When she looked around, she realized she was in a hospital bed. A nurse came in and smiled at her with relief.
‘There you are again,’ she said, checking the screen showing the bodily functions.
'How do you feel?'
She wanted to answer, but a coughing fit followed and she felt how her body had lost a lot of energy.
The nurse wanted to know her name and she thought about it.
‘I don't know,’ she confessed, her eyes widening with fear, ‘I can't remember!’
There was panic in her voice, why didn't she know? The answer lay shrouded in mystery.
The nurse wanted to know if she knew what city she was in. Why she was in the hospital.
She only knew the answer to that last question.
‘I was in the water,’ she said.
‘Why?’ the nurse wanted to know, but she didn’t had an answer to that too.
Suddenly they both noticed a tall, muscular young man leaning casually against the door frame. He had blond hair to his shoulders and a small beard that was slightly darker in color. Light brown eyes looking at the two women.
‘You are?’ the nurse approached him with a questioning look, and the man seemed amused.
‘I know who I am,’ he said with an amused grin and entered the room.
He walked over to the girl and looked at her inquiringly. His hazel eyes swept over her face, so intense that they made her warm.
‘Do I know you?’ she asked.
He smiled and his gaze softened.
'No, but I'm the one who got you out of the water.’
Her green-brown eyes looked at him in surprise.
‘You saved me? Do you know how I ended up in the water?’
‘You jumped.’
His simple, honest answer made her look startled.
‘You mean I jumped into the water on purpose? Why?' ×