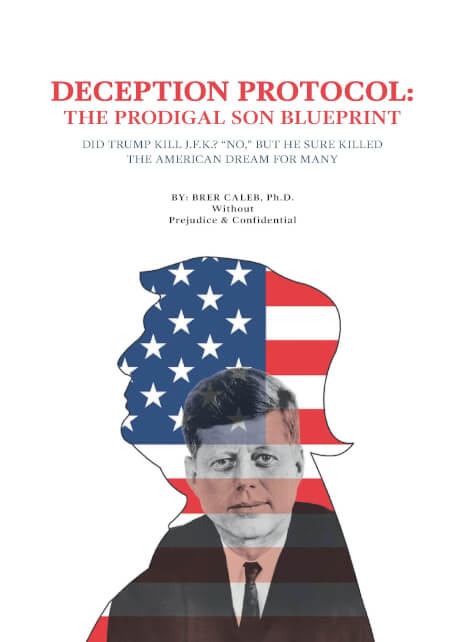 We dedicate this writing to the Designated Body of Yahshua HaMashiach and his believers' Jews, Gentiles, Muslims, and Godfearers.
Readers should know the content builds on information explained in other installments of the Restorative Justice series. Yes, you can make more money but not more time, so pay attention.
In the Restorative Justice series, The Deception Protocol:
1. – The Prodigal Son Blueprint
2. – The Politician Notes
3. – The Money
4. – The Gatekeeper
5. – The Virgin Blueprint
6. – Armageddon

Yahshua /Jesus said, "... But if you will not know yourselves, you dwell in poverty, and it is you who are that poverty." In to-day's cultural environment, no person in modern academia would even consider the fact in this statement. Those who believe they are well educated and alert remain clueless to what they portray in reality with the words, "Know Thyself." It would be virtually impossible for them to understand that they dwell in a state of Intellectual-Poverty. Because one fails to understand the portrayal as the cosmology of mind and to be with the natural laws of creation, academia remains men-tally flat-lined with absolutely no chance of genuine insight. Some of us might remember the three blind mice. It is how I felt as I prepared this writing. As a person that deems education high, I was embarrassed for where I found myself in prison in a place full of misfits. My first emotions were, how did it come to this? My second response was that I fit right in for I failed to understand there are several ways of looking at the story:
Answering to a Higher Authority

A historical record;
1. To connect to the person I am in this world with;
2. With my inner knowledge through Ruach HaKodesh, the source of all knowledge of creation;
3. Also, ultimately, the core of my higher perception depicted as the Logos/Son of Adonai, my Big Brother, Yahshua HaMashiach, aka Jesus Christ.

With this objective in mind, I can only share my primary thoughts of the experience. For scriptures is to develop those potential areas of the brain necessary to employ the process of vacancy to tap into this inner source of knowledge that eclipses all the wisdom of this world.
There are four threads in the book:
1. My eighteen-year legal battle;
2. Christian and secular history focusing predominantly on the financial industry;
3. Conspiracy of the political, monetary, and Spiritual power by the Illuminati of TheDevil.
4. A TruthSeeker’s perspective on TheWay

To appreciate this narrative, we break it down in four essentials for a genuine understanding of the relationship to which they called G-d through HaMashiach.
You, my reader, might need to scan this book initially to get the overall context. Then go back to understand the details. When you read this bit by bit, you might face the possibility of misinterpretation.
For example, the material on the Early Church Believers contained various beliefs put forward to get an understanding of the changes. Don’t think I am advocating what I do not believe - e.g., Gnosticism.

It looks like G-d is in control, but someone is causing chaos
To understand the secret of the Tree of Life, TheWay, and TheDevil, we need The test of a first-rate intelligence. Which is the ability to hold two opposing ideas in mind and still retain the ability to function?

Keep up the great work, and be encouraged in all things. Ephesians 3:20, Complete Jewish Bible, (CJB): 20: “Now to him who by his power working in us can do far beyond anything we can ask or imagine.”

Brer Caleb, Ph.D.
Is the Penname of a Citizen of the other kingdom
The Ph.D. stands for Posthole Digger, for we will continue to dig for a proper foundation for the prodigal son and daughter.
Hypothesis, higher spiritual knowledge of the far country!
HYPOTHESIS: If Adonai G-d Is a Spiritual Power, Money, or Mammon is a Spiritual Power.

Grief-Stricken with ORD, Obsessive Religious Disorder
I did not suffer from ADD, but they haunted me with ORD, Obsessive Religious Disorder. This part is about the power they controlled us with, again and again. You need to know this so you can avoid it. What can we do to create a better future and avoid the consequences if we don’t deal with this problem? Discussing this intelligently, unpacking it and saying, "Oh I see, I was a victim, and this is what happened, I get it," we need to do something about this. I feel blessed, writing these novels and discovering my way out of that sickening feeling. To know that I am healthy, secure, and free of anxieties for I oversee the depth and the profoundness of my life. I hope you are listening.
Are we disaster-prone? More critical, specific values are declining, and if we cease to abide by the rule of law, let alone the Spiritual rule of law, we are disaster-prone. During my incarceration, I saw many inmates turn to religion to cope, a form of religious conviction, but a private and personal kind of belief. The valid distinction should be between Spirituality and organized religion. Yes, a personal quest for G-d! Everything they taught me about politics, money management, and Christianity.

As a Convicted Felon, I Finally Got It and Was Set Free! Please don't wait till your incarcerated, before you get the memo? ×