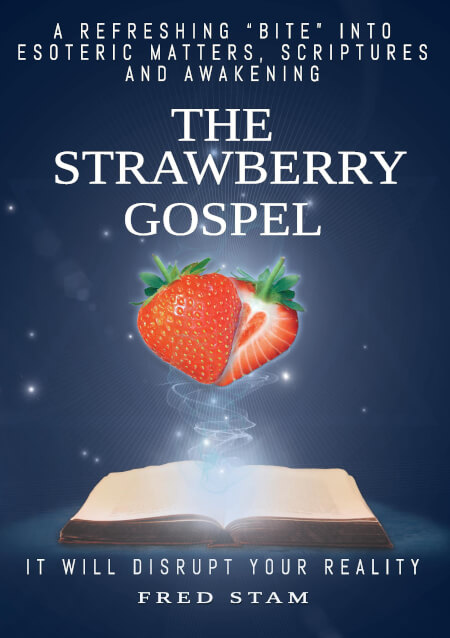 A refreshing "bite" into esoteric matters, scriptures and awakening. It will disrupt your reality.

‘Go ahead, cut the Strawberry,’' - said the voice.
The knife moved slowly through the red body until the two sides fell apart.
As I gazed at the sliced strawberry it all made sense. The bright white core of the strawberry showed itself, and from it little white lines spread outwards to the edge where they touched the fruit-pods embedded in the surface.

And then it occurred to me that, what I was looking at would have multiple levels of understanding to it. Supporting all the levels that my spirit teacher explained to me that night and as promised, would be unveiled in a practical matter by the strawberry.

WE ARE ALL CONNECTED!

We are All One.

It was no more than a week after that I would have one of my scariest experiences. The events that occurred lasted for several days and would eventually lead to my first steps on the road to my awakening and to the people – teachers, mentors – that would help me on and along my way.

This episode had me shaking on my foundations of everything I thought and believed to be true, about myself and my reality.
After confiding in a friend about this episode and the scary experiences and not knowing where to turn to for answers, he told me about a woman he knew who would know more about these matters. But before I came in contact with her, I came in contact with her friend. I remember that episode really well.

At this time I was honestly thinking, ‘Well this is obviously what it is like when you lose your mind’ – ‘When you go crazy’.
Because there were “things” happening in my life that most certainly were not part of reality as I knew it before all of this.

My process of awakening.
Inherent hurdles, insights and humbling lessons

I remember in the early stages someone saying to me, ‘you are not normal, you’re paranormal’. At first, I thought, hmm maybe this person is right. But the word felt like a burden and implied I was special. But I didn’t feel special, I felt normal – It’s what I was, I didn’t do anything extra for it – It just came naturally. I didn’t see it as an add-on or something next to normal, – it was my normal.

So I started thinking, okay so I’m odd because I see things out of the ordinary i.e. next to or beyond that what is to be considered normal. But then I thought, this is the world upside down. If I can see it, that means it is there and thus part of reality, maybe you could say I see more of reality – of nature – or of ‘that what is’. So if someone didn’t see more of nature, more of that what is, aren’t they the odd ones out, aren’t they the ones ‘Paranormal’ and I, actually more normal. Which lead me to the question, ‘what is Normal?’, I found that,

Normal is what the masses consider to be normal; is that even Normal?

This is where I let go of trying to fit in. Trying to be somebody else’s normal; I was normal. I was perfectly sane and sound of mind, but my perception of reality had become stretched....

Another method that is applied very strongly in periods of big change, is the use of esoteric knowledge; tapping into the ebb and flow of our collective consciousness and twist it, use it to gain an advantage.

Okay, let me give you an example, one you can or will feel playing out at this moment particularly, – in the year 2020.

Lot’s of rules, laws and regulations are coming into place – by that I mean, are being compliantly accepted by us – by riding the wave, the inflow from our collective consciousness to become one again and our search of higher-self identity.

Authorities, at present, are confusing us with paradoxical actions as they use the guise of oneness to create a (one) global state. But at the same time create separation by continuously labelling groups of people to create opposites as to divide and rule. Playing us out against each other in the next act of the play. Don’t accept or abide your label, by now you know it is by far not what you are. You are far more and beyond a mere label.

If anything it is a handle for authorities to control you, but you are in truth a sovereign being.

And it’s because we are awakening more and more to our true self and more and more aware of this very fact that we are sovereign, autonomous, neutral, (higher)self-governing and all the other synonyms – that authorities are trying to reign in that independence, by getting us to freely give up our independence under the guise of providing us with answers to our search for self-identity and oneness.

By giving us a label as to get a sense of belonging and at the same time dismissing nations into nonexistence, therefore its sovereignty – no nation flags allowed in the EU state – and exchanging it for one state, a global state, – the only sovereign, untouchable authority over you.

So your inner self is wakening up to your inner reality, to a sense of belonging to… a bigger part of the whole, therefore willing to submit to that perception of that sovereign inner being. But that perception is at the same time being manipulated by established authorities in your external reality, misleading you into a false sense of the obvious thing to submit to.

Remember, whatever establishment tries to convince you, deceive you, into giving up your sovereignty – and even if you do – there is still only one sovereign state, and that state is,

the sovereign state of our higher-self.

It can never be truly taken, only willingly given away! ×