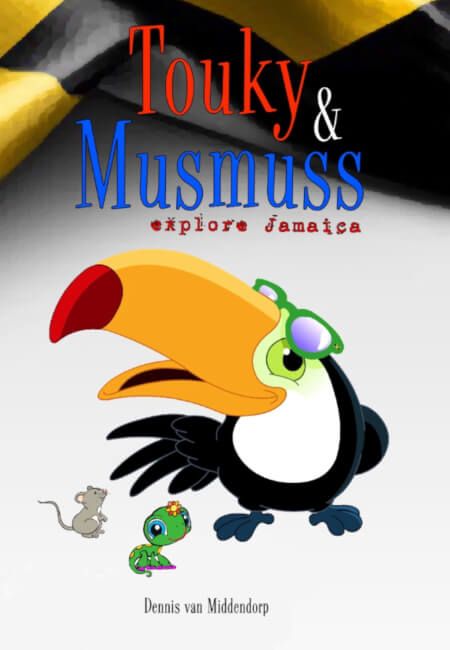 Touky, Musmuss ans Usain enter the cave after testing the Walkie-Talkies.
Musmuss also got a flashlight from his backpack so they have some light because it’s quite dark at the cave.
It’s a bit crisscross of tunnels inside but the smart mouse puts marks at the wall, so they’ll find their way out later.
Suddenly a big ‘ROAR’ echoes the tunnels which makes them shiver a bit, but they won’t give up.
There are also marks at the floor, it seems like claws of a big animal, Usain thinks.
It takes some time to find their way through the tunnels so now and a while they contact Lippy to keep her posted.
Sometimes Musmuss kneels to study the tracks, using an animal Encyclopaedia.
He’s pretty sure it’s a black panther!

Suddenly they spot some green eyes in the dark and disappear into the tunnel again.
“I think we’re close now!”, Musmuss whispers.
They sneak forwards at the end of the tunnel where they reach a big space.

Immediately the animals stop and look around.
At the centre there’s a rock, a book floating above the rock.
The book also lights up, it’s amazing to watch.

Behind the rock a black panther is standing, wearing a pointed head.
He looks like a wizard, wearing that hat and the magic book. ×