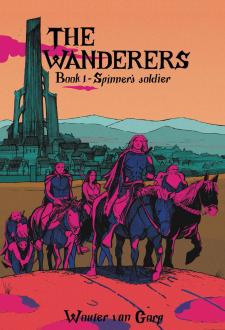 The Wanderers, Book I

Regrettably, liquor came cheap at the Sleeping Ram.
The priest was downing his fifth mug of home-brew, his claims to having the Maker’s own balls growing taller by the minute.
“Five o’ them, big farm people all. Coming at us with pitch forks and torches, screaming bloody murder. And the hounds! You should have seen the hounds. Fierce pack of bastards, more wolf than dog, really. And did we flinch? No sir, not us Wanderers, not us. I sent a quick prayer skyward to the Maker, being a devout man, and readied my shield and axe.”
The audience of town dwellers nodded good-humouredly. It was the fourth time they were hearing this story in a week’s time, each rendition a little flashier than the one before.
They knew that the priest, a Dwarven block of concrete called Morim, was lying his ass off, but they didn’t mind much. It made for a good story.
In truth, there had been only the one farmer seven days ago, along with a sleepy stable boy and a scrawny little runt, yapping at us from behind his owner's legs. Some border dispute between two small-time landowners, a vendetta about who-owns-what that had run for nigh on five generations, as far as I could garner. And it had all been set straight by us, the mighty Wanderers.
A good meal, a night in the hay, and some small payment in cash and livestock. All it took for the old farmer to convince us to go and give his neighbour hell about the field on the far side of the creek.
Decked out as we were in mail, leather and not a small quantity of lethal hardware, the unlucky neighbour had only needed one good look at us to decide that his two-man, one-dog army wasn’t going to cut it. Some half-hearted grumbling about his family rights ensued, but a little attitude from the men – and woman – in armour made him give up his claim to the field, nice and easy.
And so the five of us were ten bits of silver and a goat the richer when we came into Peekvale, a town straddling the east side of the Edge. It existed most primarily on the merit of always having been there, but there was some profit to be had from the north-south route as well. If the landlord of the Ram was to be trusted, a little over six thousand people called the timber-enclosed town their home. Landowners, some miners and craftsmen, a couple of merchants. It had a nice, cosy feel to it.
Too cosy. There was not a job in sight for a group of jumped-up brawlers such as ourselves.
Selanna had suggested going around the country side, playing the farmers against each other and reaping the rewards. The Dwarven priest had backed her up with great enthusiasm.
But our illustrious leader had decided the rewards wouldn’t cover the cost of keeping us in the field, and that we needed a real contract. Suddenly, his hopes at some quick cash quashed, the priest had come up with some moral objections to robbing the poor farm people.
A flexible faith-goer, that one.
So here we were, back at the inn for the seventh night in a row, drowning the disappointment of another day of fruitless soliciting in brew we could barely afford. Our goat had been sold already, and I figured it would take just one more day for our Captain to tell us to pack up and leave town. Maybe our prospects would be better down south. Maybe.
“Youngster, your round. Go fetch.”
Youngster, that’s me. It's not even a nickname. My parents had simply been that much without imagination. But as I really was the youngest of us, I followed orders and went for beer.
The suggestion came from a big, simple savage called Cruud. A plain dweller from the south, come north to Arnos to make a living by intimidation and violent know-how. Has a big crush on our only female member, Selanna: young, pretty, deadly. No morals whatsoever. Her foster parent sat next to her, the wizened little wizard called Archibald, also the Captain of our little gang. Perpetually pursuing knowledge and puffing smoke out of his nostrils, the little guy was willing to turn a blind eye to anything his adopted girl did. Had a toad called Aristoteles for a pet, to make matters worse.
Oh, and then there’s the priest I mentioned. A bluff, brash Dwarf. Goes by the name of Morim. All the charm of a jolly, religious brick wall.
I joined up with these bozos about a year ago. What can I say? They grow on you. ×